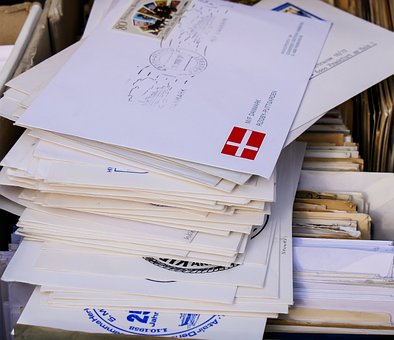 The envelope had a post-it note stuck on it. It said, ‘Today’s letter is the last one.’

I tore it open, a feeling of anxiety and excitement simultaneously building up inside me. What surprises would this letter hold?

Inside, just like all the other letters I had been receiving, was a blank white sheet of paper with just one alphabet on it. This time, it was an ‘E’.

What could these mysterious alphabets mean and what were these letters trying to tell me?

I gathered all the previous letters, stacked them in order of their date of arrival and then sat down to figure out what they could mean.

Just then, I noticed the envelope lying on the floor and picked it up, staring at the post-it note. It was a usual yellow colored note with just that one sentence written on it. I was about to put it down when something caught my eye. It wasn’t the note, it was the handwriting on the note that was puzzling. The handwriting was exactly like Clara’s.

Clara was my 18 year old daughter. Two months back, on a lazy Sunday afternoon, I was taking a nap when one of her friends called me, urgently summoning me to the hospital. I rushed there only to find out that Clara was dead. A speeding motorbike had collided with her, killing her on the spot.

A week after this accident, I received an anonymous letter with the alphabet ‘I’ written on a sheet of paper. The very next day, another letter. This kept continuing, a new letter every day. On some of the days, I even received a blank sheet of paper. And the most peculiar one was the sheet with just a little black dot on it. And till today, I had not been able to understand what these mysterious letters meant.

Now, looking at the handwriting on the note, I felt a sudden urge to uncover the secret behind these letters. I felt that these letters were somehow related to Clara.

I opened up the letters and arranged them on the floor, one after the other, in the exact same order in which they came. As soon as I did this, I realized that the solution to these mysterious letters was staring at me. The alphabets when put together, made words. And the words when put together, made sentences. The blank sheets were used to show the space between two words in the sentence and the little dot was a full stop. Now that I finally figured it out, I wrote down the words on another piece of paper so that I could clearly read it. It said-

“It was no accident. Josie killed me”

I was speechless. How was this possible? Josie was Clara’s best friend who had suddenly vanished from her house two months back. And exactly 12 hours before Clara had died. Josie’s body was found lying in one of the farmlands on the outskirts of our little town. Why would Josie want to kill Clara… they were the kind of friends who were always there to help each other? And more importantly, if Josie had already died, how could she come back to kill Clara.

Beyond all this was another mind boggling question. Where had these letters come from and who was writing them? Who had so cleverly coded this message and sent it? And how was Clara’s handwriting on the note?! Was it Clara herself who had written these letters? And if so, how? Because I had myself seen her body lying in the coffin before it was lowered into the ground! Were these girls coming back from the dead or did they never die?…

I am a student of science who started writing at the age of 12. My first short story for children was published online at the age of 13. From then on, there has been no looking back. My first book for teenagers called 'Muskaan- The Story of her Smile' has recently been published on Amazon. The link to the book is- https://amzn.to/2GZe4qD. The book is also available in paperback on Pothi.com and the link to the paperback version is- https://pothi.com/pothi/book/sneha-ganesh-muskaan-story-her-smile I have been nominated for the Sunshine Blogger’s Award on the 13th March, 2019. View all posts by Sneha Ganesh

18 thoughts on “The Mysterious Alphabets…”